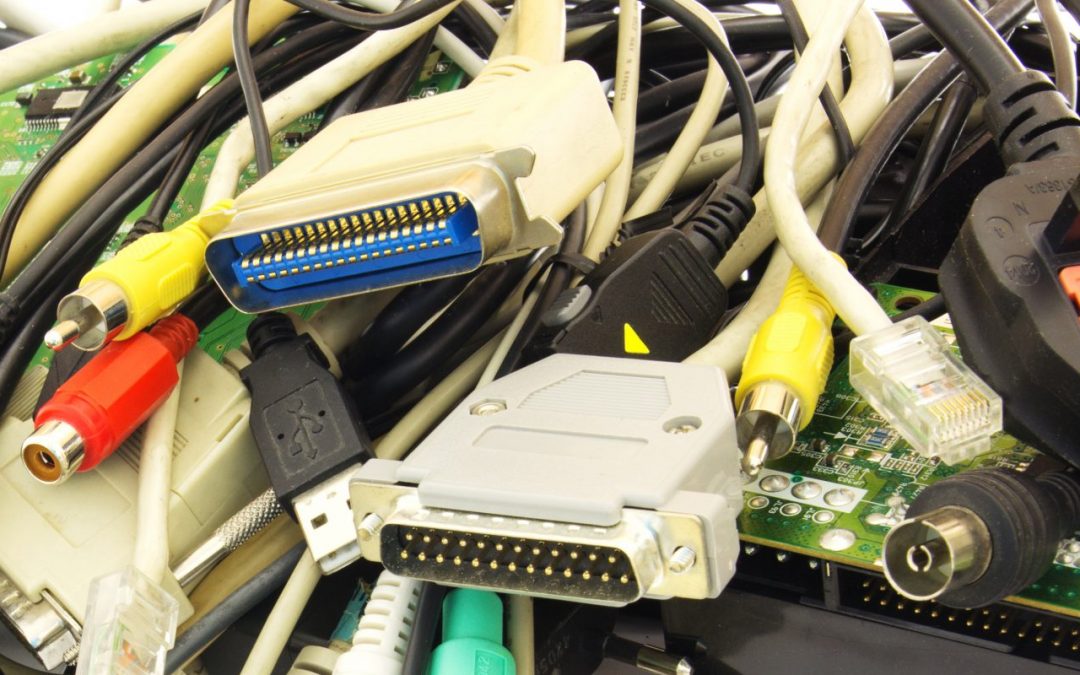 Decluttering has gone mainstream. There are tools that help you declutter (such as totes, bins, and various nifty storage systems). There are books that teach you to declutter.  There are even entire websites devoted to the topic (like the one you’re reading).

And there’s nothing wrong with any of that; decluttering overall is good.  The problem is, many people interpret “decluttering” as “finding ways to make their space visually appealing”, which is just a hop, skip and a jump from “finding creative ways to store more stuff”.  There’s a twisted sense of accomplishment in organizing all of your stuff into bins, boxes, totes, racks, and elaborate “organizing systems”.  It makes you feel like you’ve accomplished something.

But is your investment in storage actually causing you to have more clutter, rather than less?

Let’s take an example.  I have a bin of cables.  This is a real bin, in my closet at this moment.  It’s a medium-sized grey Sterilite storage tub.  In it are a number of miscellaneous cords, power adapters, converters, etc.  This bin has its space in the back closet where it goes, and we don’t usually find cause to complain about its presence.  It was a leftover bin from last time I moved, and I needed a place to store a couple dozen extra cables.  Into the bin they went.

The problem with the cables currently stored in the bin is that many of them are unnecessary.  Most are duplicates of other cables.  Duplicates are fine if they’re in use (or are rotating in and out of use on a frequent enough basis) – but in what parallel universe would I need 30 standard USB cables of varying lengths?

The real question isn’t how many cables are in the bin, though.  The question is, how did the cables accumulate in the bin?  The answer is simple.  The bin, in a passive way, caused the accumulation of the spare cables. It had plenty of extra space.  It was given permission (by me) to take up the space that it currently occupies.  It was all downhill from there.

Electronic items all come with cables.  As the items are disposed of and removed, some leave cables behind.  Other cables are given to me by friends who would otherwise be throwing them out, and I frequently don’t know if I have a spare cable of that type (as the spares rotate in and out of use).  Since the bin had extra capacity and it was “where cables go”, it’s where all the cables wound up.

Recently I decided to sort the cables into piles by type, decided what I was going to keep, and hauled all the extras off to the local thrift store.  Then I found a bin for them that is only slightly larger than necessary (in case I really do need to add another item or two to the bin in the future), not so much larger that it can hold all the extra junk that was filling it. I revoked the cables’ permission to occupy a large bin in my closet, and relegated them to a smaller area where they can be stored efficiently.

But wait….did I just buy a bin to store a bunch of unsightly cables? Wasn’t that the original complaint? Sort of. Note the conceptual order is reversed. Initially I just threw the cables in a container with “plenty of extra space”, which meant I had unused space for cables. Now I’ve defined the space required, and hunted down a container that forces me to respect that boundary. So far, so good.

That’s the difference. With the first bin, I focused on “getting more space”, and that space immediately filled with stuff. With the second bin, I’ve focused on defining the space, thus limiting the amount of extraneous stuff that can accumulate without me re-thinking things.

What about you? Do you have any items that you’ve unintentionally given permission to occupy far more than their fair share of space?